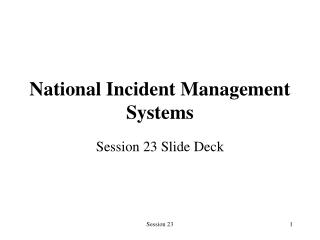 Traffic Incident Management - . a systematic, planned and coordinated use of resources to reduce the impact of incidents,

Incident Management for Healthcare - . based upon emergency management institute ics-100hc. meret worked with partners in

MIS 645 Management Information Systems - . i. definitions of management information systems. a. management: what is