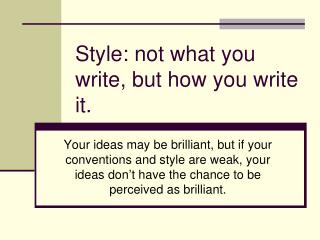 Style: not what you write, but how you write it. Your ideas may be brilliant, but if your conventions and style are weak, your ideas don ’ t have the chance to be perceived as brilliant. Diction. Diction is directly tied to word choice.

How to write an Introductory paragraph - . “one today is worth two tomorrows.” ben franklin. when you write an

Rerum Novarum - Read your quote. explain what your paragraph was about, in your own words. give an example if it helps.

Welcome to - . copywriting for non-copywriters alan barker. i gave this session at this conference:. i run this

How to write an abstract - . steve wallace. the problem with motivation as a researcher. why computer games? - tell our

Among the Hidden: Vocabulary - . directions: chapters 1-3. as we go through each slide, write down the definitions next

How to write a (hopefully good) paper by Martin Vetterli - . introduction to write well..... the structure of the paper

Living on a Budget How to make the most of your VISTA Stipend - . budgeting. write it down. write down everything that

Warm Up - . work silently. raise hand to ask ms. hughes anything. get a pink packet from the side shelves. these are our

Read/Write Web Revolution: Technology and Changes in the Classroom - . application of current and emerging technologies

Warm-Up Question - . in your notebooks write down this question: q: how did this happen? play me: let's take a look...

How to write really good! - . confessions of a bad writer. obvious grammatical mistakes. it’s versus its it’s raining

Mid Year - . write the number in expanded and word form. 33,201.1. thirty three thousand two hundred one and one tenth