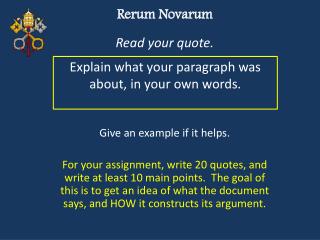 Read your quote. Explain what your paragraph was about, in your own words. Give an example if it helps. For your assignment, write 20 quotes, and write at least 10 main points. The goal of this is to get an idea of what the document says, and HOW it constructs its argument. Rerum Novarum.

From Rerum Novarum to Faith in the City: Catholicism in Canning Town Dr Alana Harris - Lincoln college university of

Catholic Social Teaching - . link of religious and social dimensions of life. the “social” the human construction of

Social Teaching of the Catholic Church - . roots and

Key principles of Catholic Social Teaching - . 1. the dignity of the human person. every human being is created in the

The Social Teaching of the Catholic Church - . rerum novarum through caritas in veritate. 2 simple questions. what is

Catholic Social Teaching - . a challenge to live the gospel justice shall flower in his days proverbs 72:70. st.