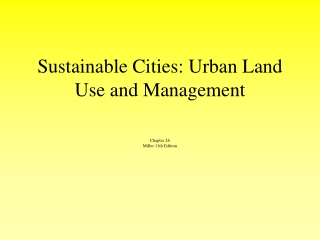 Sustainable Cities: Urban Land Use and Management. Chapter 26 Miller 11th Edition. Definitions. Urban (metropolitan) area = town plus its suburbs City = large number of people with a variety of professions who depend on resources from the outside of city boundary