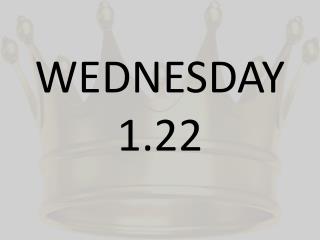 4/2 Wednesday - . totd: do you think the 535 members of congress can truly represent the over 317 million people in the

Wednesday 4/9/14 - . aim: why is gregor mendel the father of genetics? do now: how many chromosomes do you have and where

Wednesday September 17, 2014 Bell Ringer: - . determine if the following are in scientific notation; if they are not

Wacky Wednesday - . it all began with that shoe on the wall. a shoe on a wall…? shouldn’t be there at all!. then i

Phonics in KS1 Wednesday 7 th November - . aims of tonight…. show you a flavour of the how the children progress

Cultural Autobiography Due Wednesday - . individual and personal. look it up: birth year ( as group). top song year where

Wednesday , Dec. 14 - . 1. put your packets on my desk 2. update your table of contents if you did not yesterday date

For Wednesday - . no reading no homework. program 4. any questions? really no comparisons to make (easily), but i would

The Conscription Crisis Wednesday February 27th - . recall – at the start of ww1, many people volunteered to fight in