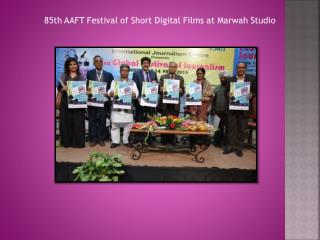 Noida Film City; It was only few people who attended the first AAFT Festival of Short Films in 1993—We never realized that we will be creating a World Record with this festival” said Sandeep Marwah President of Marwah Studio on the inauguration of 85th AAFT Festival of Short Digital Films at Noida Film City. “This is the only festival in the World to touch 85th Edition, happens every three months and given opportunity to 2000 young directors to showcase their debut films” added Prof. Kalyan Sarkar Dean AAFT. “I have never heard of so much of film and television works from one single media house, its commendable,” said S.K.Goel financial consultant. All the guests appreciated the quality of cinema. The festival was part of 3rd Global Festival of Journalism Noida 2015 supported by International Journalism Centre and ICMEI. Short Films. - Short films. by kadeem reid. what is a short film?. when we hear the term short film we often think of

History of short films - . by jak cochrane. the lumiere brothers

Short films research - . by dion johnson. 1. what is a short

Short Films and Video - . short film. a  short film  is any film not long enough to be considered a feature film . t