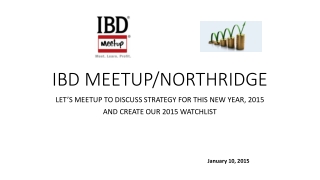 IBD MEETUP/NORTHRIDGE. LET’S MEETUP TO DISCUSS STRATEGY FOR THIS NEW YEAR, 2015 AND CREATE OUR 2015 WATCHLIST. January 10, 2015. DISCLAIMER. During the course of this meeting we will review stocks that should be considered as additions to your watch list. Welcome to Data Science ATL - . raj bandyopadhyay travis turney. why this meetup ?. we have excellent meetup groups in

IBD MEETUP/NORTHRIDGE - . september 21, 2013. summer is over, september looms. t he last 50 years, september has been the

Meetup May 2013 - . oregon ecommerce sellers group . welcome! . ebay spring seller release 2013 how will this help you?