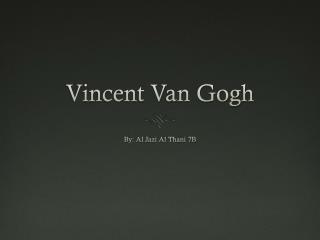 Vincent Van Gogh - Youth and family. art and faith. impressionism and the city. studio of the south. seeing color. a

Vincent Van Gogh - . what lines do you see in starry night?. what kind of flower did van gogh paint?. how does this

Starry Night by Vincent VanGogh - . re-create your own version. movement in the sky maintain vangogh’s style change the

Van Gogh  - . coffee night is an oil painting made ​​ by the artist vincent van gogh, painted in arles in