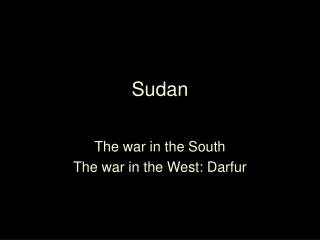 Famine strikes South Sudan - Famine is formally declared in parts of south sudan, which has been mired in civil war since

Sudan, Dafur and the UN - . the un and human rights. un nations’ preamble to save succeeding generations from the

The Fifth population census in Sudan: A census with a full coverage and a high accuracy - A- h- ali ahmed neelain

Education in Sudan and Kenya - . georgia performance standards. ss7cg3 the student will analyze how politics in africa

EGYPT - . by nicole helms. where is egypt located?. the red sea is next to egypt the mediterranean sea is north of egypt

Sudan: In Search of a Nation - . roberta ann dunbar the university of north carolina at chapel hill for bridges and