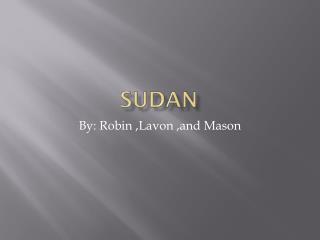 Sudan - . the media. the media only portrays the military in sudan, they don’t mention the millions dead and counting

Sudan and South Sudan - . independence. before 1956 the area that is now known as sudan and south sudan was controlled by

Sudan - . by: abdulrahman al-khalifa. level of the media coverage in sudan. media made a huge difference in the darfur

Sudan - . sudan is the largest country in africa. there are 9 countries bordering sudan. less than 7% of the country

SUDAN - . sudan. after nearly 50 years of internal conflict and the secession of south sudan in 2012, the sudanese

South Sudan and Sudan: - . potential t ransboundary w ater i ssues caused by the forming of the world’s youngest

Sudan - . b y: ronnecia bryant . weather and climate . khartoum is usually hot and dusty. during may, june, and july,