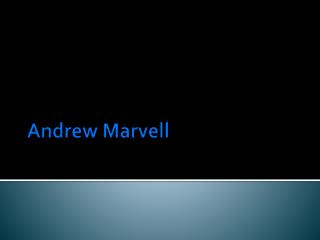 Andrew Marvell. Andrew Marvell. Was born in Winestead , South Yorkshire, England, on March 31, 1621. His father was a minister. The family moved to Hull, in the county of Humberside, when Andrew was three. There, he grew up and attended school. To His Coy Mistress By Andrew Marvell - . coy = shy and quiet, but still flirtatious mistress = in renaissance england

To His Coy Mistress By Andrew Marvell - Coy = shy and quiet, but still flirtatiousmistress = in renaissance england the

The Marvell SheevaPlug - . kevin mcgregor march 9, 2010. the sheevaplug. a cross between a netbook and an embedded

Marvell Group at a Glance - . a total solution provider: leader in storage, cloud services and infrastructure,

Andrew- - . the capital is madrid. madrid is the biggest city in spain. it is also the most popular tourist area. flag.

Andrew - . marsh. my goals. when i grow up i want to be in the mlb. the person that inspired me was josh hamilton who

Andrew - . a character study graceway-oakboro, nc. andrew worked quietly behind the scenes, winning people one by one.

“To The Virgins, to Make Much of Time” by Robert Herrick “To His Coy Mistress” by Andrew Marvell - . literary