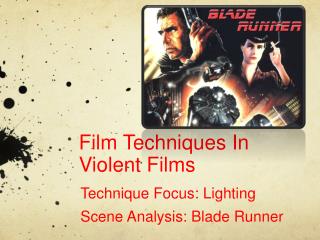 FILM TECHNIQUES - . mise en scene. this term refers to all that appears before the camera. the term means “placed in

Film Techniques - . an introduction. the drama, the attraction, of film lies not so much in what is shot – that's the

Comparing Film Techniques - . what are film techniques?. watch the opening sequence from harry potter and the deathly

THIN FILM CHARACTERIZATION TECHNIQUES - . * optical techniques refers to all regions of the electromagnetic spectrum from

Film Techniques &amp; Comparing Film to Prose - . starter. would your rather read a book or watch a filmed version of

Unit 4 Films and film events - . the eighth period. project. writing a film review. let’s enjoy some pictures. are you