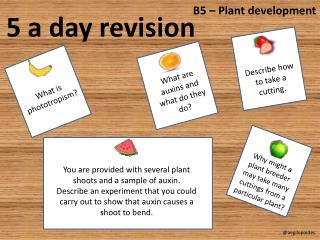 B5 – Plant development. 5 a day revision. What are auxins and what do they do?. Why might a plant breeder may take many cuttings from a particular plant?. You are provided with several plant shoots and a sample of auxin. How we used coleoptiles to discover how auxin drives phototropism - . bergv@uni.edu. germinating oat seed. tip of

The Stress Effects of Phototropism and Different Colored Lights on Arabidopsis Wild-type and Mutant Strains. - The stress

Plant Tropisms - . tropism. is a biological phenomenon, indicating growth or turning movement of a plant in response to

Chapter 19 auxin - . summary: early experiments in auxin research. auxin is transported to lower side of a horizontally

Plant Responses - . how plants move and communicate. tropisms. tropisms are the growth of a plant toward or away from a

Unit 4 review - . pay attention, the test is tomorrow, these questions might be on the test. do your best. energy from

Plant Hormones - . what kinds of things do plants have to respond to?. light - phototropism touch - thigmotropism gravity

Plant Hormones - . plant tropisms. growth in a particular direction in response to an external stimulus. response to

Ecology Project - . unit 6. what is ecology?. the study of interactions between organism’s and their environment . what