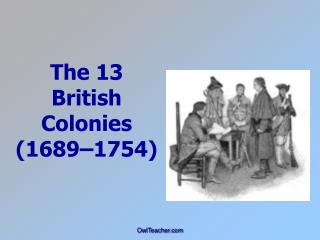 The 13 British Colonies (1689–1754). The English Civil War. England’s Parliament was made up of representatives of the people. It had the power to make laws and approve new taxes. King Charles I demanded money from towns and cities without Parliament’s consent. Colonies in the British Empire - . colonies vs. england. england’s commercial empire empire spans the globe and is also

Development of the British Colonies - . economic characteristics of the colonial

The 13 Colonies - . by lila h. the founding fathers. george washington was the first president of the united states

THE 13 COLONIES - By steven, luis, erin. the 13 colonies. why were the colonies founded. the colonies were founded for

British Colonies - . unit 1.4. coastal cities. cities in the colonies were on the water. why? by 1750, the largest

Early British Colonies - . motivations for colonization. ticket in hooray ! we finally have the technology that will