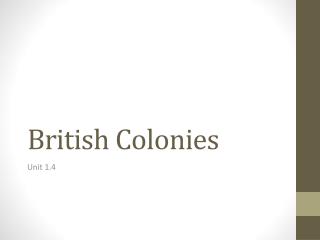 British Colonies. Unit 1.4. Coastal Cities. Cities in the Colonies were on the water. Why? By 1750, the largest (Primary) cities were: Philadelphia, NYC, Boston, Charles Town, and Baltimore Primary Port Towns: Headquarters for large scale trading

Chapter 3 : The American Colonies Take Shape - . immigration and slavery 90% of migrants to english colonies from england

American Colonies vs. British Empire - . who should win the american war for independence? why?. american adv. gw’s

The English Colonies of America - . chapter 3. 13 english colonies. by 1733, there were 13 british colonies along the

Lesson One: What were the British colonies in America like in the 1770s? - . unit one. terms to understand. founders

The Early American Colonies - . unit i. standards covered in this unit. ssush1 the student will describe european

The British empire - . part one. a brief history of the empire. the industrial revolution. a mill – a factory – a