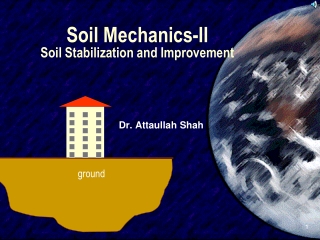 ground. Soil Mechanics-II Soil Stabilization and Improvement. Dr. Attaullah Shah. Soil Improvement and stabilization. If soil near the ground surface is strong and has sufficient bearing capacity, then shallow foundation is adopted. i SOIL CHEMISTRY - . soil ph. a measure of the degree to which the soil is acidic or basic ; also known as . . . soil

Earth Science: 5.2 Soil - . soil. key concepts for today . . . . today students will learn and identify what are the

NATURAL RESOURCES SOIL RESOURCES - . index. introduction prior knowledge soil resources where does soil come from? why

SOIL EROSION on PEI - . the dirty facts . soil erosion is.. the process of soil particles being carried away by the

Chapter 8 - . soil: foundation for land ecosystems. 8.1. soil and plants. soil vs. dirt. soil is much more than just

Soil Texture &amp; Structure - . soil texture. what is soil texture? it is the proportion of three sizes of soil

How Soil Forms - . what is soil?. rocks and sediments might not seem to have much in common with soil, but soil is what

Ch. 8 - . weathering and soil formation. section 2: how soil forms. what is soil? soil is the loose, weathered material

Soil Degradation &amp; Management - . tasks. what is soil? (260) the importance of time in soil formation? what are

Soil analysis - . what is soil?. soil itself is very complex . it would be very wrong to think of soils as just a