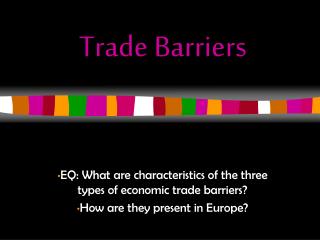 Trade Barriers. EQ: What are characteristics of the three types of economic trade barriers? How are they present in Europe?. International Trade. Involves the exchange of goods or services between countries This is described in terms of Trade Barriers - . revenue tariff. an excise tax placed on goods not made in the domestic market used to raise $$$ for

International trade barriers - . overspecialisation on a narrow range of

Protectionism: Trade Barriers - . every year there is some version of this on the test . free trade or protectionism?.

Barriers to International Trade - . chapter 1.5. tariffs. taxes on imports that are imposed by the local government

Effects of Trade Barriers - . impact on trade impact on industrial or firm profits impact on labor (wages or rate of

TRADE BARRIERS WHAT AFFECTS CLIMATE AND TRADE? - . what affects climate?. equator. places on or near same latitude line

The Trade Barriers Regulation TBR: - 2. the tbr is:. an instrument at the service of eu enterprisesto remove obstacles to