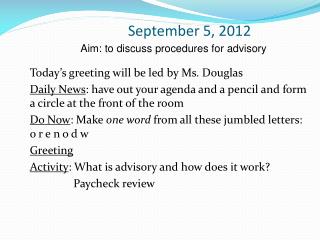 September 5, 2012. Aim: to discuss procedures for advisory. Today’s greeting will be led by Ms. Douglas Daily News : have out your agenda and a pencil and form a circle at the front of the room Do Now : Make one word from all these jumbled letters: o r e n o d w Greeting