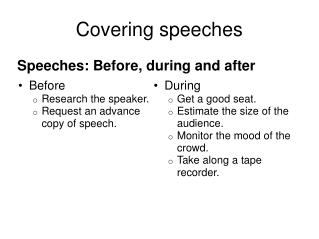 Covering speeches. Before Research the speaker. Request an advance copy of speech. During Get a good seat. Estimate the size of the audience. Monitor the mood of the crowd. Take along a tape recorder. Speeches: Before, during and after. Covering speeches. After Speeches! - . learn to identify and understand the features of a great speech. so what makes a good speech?. the two

Speeches - . speeches. a speech is a nonfiction work that is delivered orally to an audience. some speeches are composed

Speeches - . non-fiction unit. background. in the 1950’s, the population in the us was increasing due to the baby-boom,

Speeches - . spring 2014. looking for literary devices . help the speech-giver to make an impression help add to the

Speeches - . part i. two write a speech. and other useful things. types of speeches. informative speaking

Speeches - . background. in the 1950’s, the population in the us was increasing due to the baby-boom, after

Speeches - . play. help and reminders. attention getting devices. when delivering a speech, it is important to employ

Speeches - . dialogues, monologues, &amp; soliloquys. what is dialogue?. a conversation between two or more people

speeches - . to start …. why am i giving this speech ? who is the audience ? what is my purpose ? am i informing the

Speeches - . a speech, like a play, must be written to be heard, not read. p a i n t a picture with

Editorial Speeches - . speaking to persuade. editorial speeches. your primary purpose is to persuade! take a stand on an

Informative Speeches - Chapter 15 recap/lecture. informative speeches. purpose. to inform; not to advocate goal is to

Demonstration Speeches - . “how to speech” guidelines. speech that lasts 3-5 minutes in length demonstrates how to do