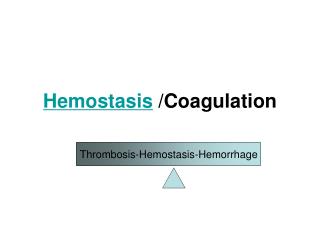 HEMOSTASIS - . is a complex of homeostatic reactions, which result in arrest of bleeding from damaged blood vessels (

Hemostasis and Blood Coagulation Events in Hemostasis - The term hemostasis means prevention of blood loss. whenever a

Hemostasis - . s equence of responses that stops bleeding when blood vessels are injured a process s ometimes referred to