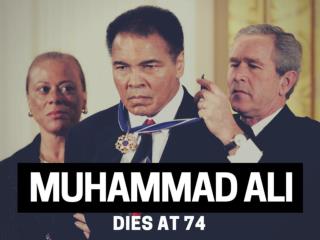 Muhammad Ali, who declared “I am the greatest” and proved it many times over, infuriating some and captivating countless more as he floated like a butterfly and stung like a bee on his way to winning the world heavyweight championship a record three times, becoming perhaps the most widely recognized person on the planet, died Friday in Phoenix. He was 74. Mr. Ali had long suffered from Parkinson’s syndrome. The condition was understood to be a consequence of his boxing career. The Writings of the Bab - . a survey based on english language sources. this work [the qayyúmu'l-asmá], of such exalted

QUAID-E-AZAM MUHAMMAD ALI JINNAH - . a great leader and founder of pakistan . the role model. who was quaid-e-azam ….

They’re Gonna Hear the US Roar… - . why was the treaty of versailles rejected? what was the league of nations? what

Die Attach Process - . die picking. die can be directly picked from the wafer after the wafer sawing process. die bonder

The Five Pillars of ISLAM - . first pillar. declaration of faith ( shahada) one rendering is: “there is no god but god

Muhammad Ali - . by: axel contreras. content. the birth and childhood the beginning of ali’s career being a champion,