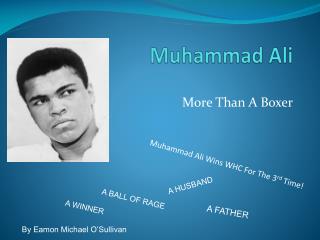 Muhammad Ali. More Than A Boxer. Muhammad Ali Wins WHC For The 3 rd Time!. A HUSBAND. A BALL OF RAGE. A WINNER. A FATHER. By Eamon Michael O’Sullivan. Introduction. Muhammad Moazzam Khan - . importance of inland waters, lakes and marine fish species and the impact of climate change on

True or False? - . islam is a peaceful and tolerant religion. muslims worship the same god christians and jews do. allah

Mosque of Muhammad Ali in the Citadel, Cairo. Ottoman style - Minaret of the zaytuna mosque, tunis. the mosque was built