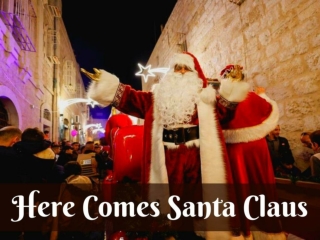 Santa makes appearances all over the world leading up to Christmas. Here comes Santa Claus… - . this december 15 th , we will be taking a field trip to children’s theatre at casa manana

Santa Claus - . santa claus is from finland. santa claus brings gifts to children at christmas. how to recognize santa

Santa Claus - . question. why do es santa wear red clothes? why does santa live near north pole?. the origin of

Santa Claus Rovaniemi - There are various ways of making cards and handmade cards are the best ones. if you seek help in

Letter to Santa Claus - . dear santa. dear santa the claus, we were very good boys so we want some gifts due it so here

Santa Claus: The Movie - . half santa biography, half modern day tale. when one of santa's elves goes rogue and joins up

Santa Claus Delivers Presents - . mrs. claus. it is christmas eve and mrs. claus is sleeping in her rocking chair. santa