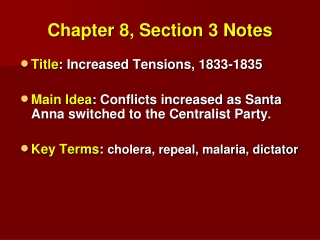 Chapter 12 Section 2 Notes The U nited S tates Goes to War - . background: us was caught off guard by ww1 president

CHAPTER 18 SECTION 1 NOTES - . 3 characteristics of all chordates:. 1. notochord – flexible rod that extends along

Chapter 2 Notes - Intro – in this section we will learn about non-real numbers. the motivation for this is to find the

Chapter 9 Section 3 - . review notes for quiz. character development. are you a good citizen? (take this self-evaluation