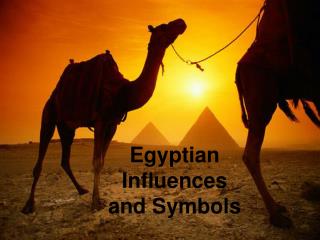 Egyptian Influences and Symbols. The Solomon Key. Dan Brown is rumored to have written a sequel to The da Vinci Code , and a possible sub-topic of Langdon’s quest could be on Egyptian influences on the Founding Fathers and the building of our Nations Capitol. Akhnaton - Influences. Egyptian symbols - . http://www.eyelid.co.uk/pyr-temp.htm. the eye of horus the udjat eye represents the eye of the

Egyptian Symbols - . the egyptian culture was rich in symbolism. symbols were used for religious and magical purposes by

Regalia and Symbols of Egyptian Kings and Queens - . contents:. crowns and headdresses of kings------2 crowns and

Characters and Symbols - . what symbols can be applied to the various characters in tkam?. an exploration of a character

Allegory and Symbols - . 1. party guests what it represents : they represent humanity/ human beings. how it helps

Symbols and Symbolism - . a symbol is anything that hints at something else, usually something abstract, such as and

Signs and Symbols - . the difference between symbols and signs -

Symbols and Motifs - . how to identify symbols and motifs in literature. what is a motif?. motif: a unifying element in

Signs and Symbols - . concept # 2: all media constructions involve the use of forms, conventions, and codes. okay, so

Signs and Symbols - . the aim of the lesson is to develop an understanding of symbols and describe the difference between

Signs and Symbols - . ms dunlop 3 rd year religion . signs. a sign is something that communicates a brief message. a

Maps and Symbols - . first grade caroline lamagna. maps are a geographical drawing of a real place…. most maps have a

Choices and Influences - . eq: what are some roles that advertisers play in the world of media?. what influences you to

Symbols and Symbolism - . a symbol is anything that hints at something else, usually something abstract, such as and idea

Signs and symbols - . li: i can recognise some human needs. stan always packed his bag with the equipment he needed for

Circuits and Symbols - . electricity. an open circuit has a break so electricity cannot flow. a closed circuit allows