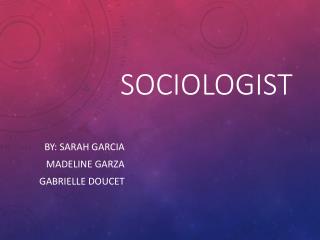 The Bill of Rights - . the first 10 amendments to the u. s. constitution. who determines what the bill of rights mean?.

Introduction to Sociology SOC-101 - . unit 11 - deviance. what is deviance?. sociologists use the term deviance to refer

Deviance and Social Control - . what is deviance? pages 154-157. deviance - violation of the norms sociologist howard

Karl Marx - . hijo byeun. who is karl marx?. karl marx was born in trier in 1818, just after napoleonic wars. his

The Generation of Change - . how leaders in their 20s and 30s are reshaping american jewish life (based on avi chai

Confessions of a social scientist - . my meanderings in the world of abm. about me. (quantitative) sociologist some