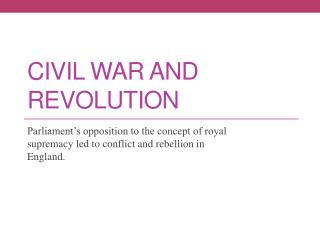 Civil War And Revolution. Parliament’s opposition to the concept of royal supremacy led to conflict and rebellion in England. Objectives. Explore what led to the conflicts between Charles I and Parliament. Examine how the rebellion in Ireland helped start the English Civil War.

Oliver Cromwell and The English Civil War - . by jan nápravník. historical background. number of population was

The Civil War The Restoration The Glorious Revolution - . after the death of elizabeth i in 1603 james i became king

The Russian Civil War - . 1918 - 1921. immediate problems. the shortage of raw materials and investment capital had

England: The Decline of “Absolutism” and the English Civil War - . unit 2 - day 7. a short history of parliament.