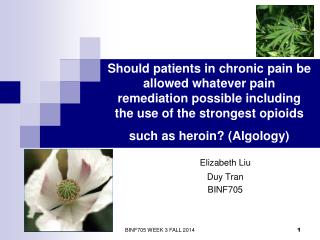 Should patients in chronic pain be allowed whatever pain remediation possible including the use of the strongest opioids such as heroin? (Algology). Elizabeth Liu Duy Tran BINF705. Definition of Chronic Pain. Originally defined as pain that has lasted 6 months or longer. Michael Tran - . age: 18 major: biology what i look for: great personality, has a sense of humor, well kept hobbies:

Liu xiaobo - . a fighter for human rights in china . background of liu