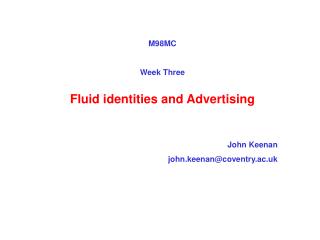 Workshop on Use of NWP in Support of Nowcasting - . initiated by tom keenan proposal by jenny sun, jeanette onclee, and

Level 5 Diploma in Teaching and Learning ESOL/English 2506/8 John Keenan j.keenan@worc.ac.uk - . what do you love?. about

*with thanks to Ian Miles &amp; Michael Keenan who have kindly provided some of these slides - Scenario planning dr.

The First Epistle o f St. John - . the 1 st epistle of st. john. author: + the apostle john is the author, who also wrote