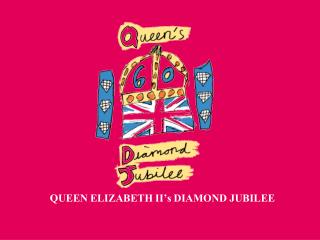 QUEEN ELIZABETH II’s DIAMOND JUBILEE. This year, Queen Elizabeth II will celebrate her diamond jubilee. A jubilee is a celebration held because of an anniversary. In the case of a King or Queen it marks the number of years that they have been King or Queen. Different Jubilees. Life as a Puritan - . puritan history. the history of puritans began in england during the reign of queen elizabeth i.

2012 Diamond Jubilee Celebrations - . we sit on the lord lieutenant’s diamond jubilee group with: the army, woman’s

Queen Elizabeth and King James I of England - . the elizabethan era. by: kiana taylor and krista frey pd.6. queen

The Queen of England Elizabeth II - . author: marta graban. elizabeth . the queen of britain was born 21 st april in 1926

Elizabeth I and II: Two Lives, One Crown - . elizabeth i - “the queen with the heart of a king”. elizabeth i and ii -