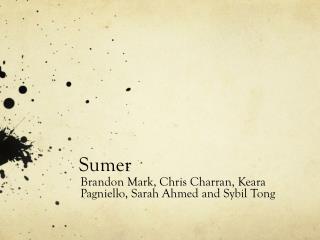 Sumer . Brandon Mark, Chris Charran , Keara Pagniello, Sarah Ahmed and Sybil Tong. The term "Sumerian" is the common name given to the ancient non-Semitic inhabitants of southern Mesopotamia, Sumer, by the  Semitic Akkadians .

MESOPOTAMIA AND SUMER - . mesopotamia. mesopotamia is the valley between the tigris and euphrates rivers also known as

Section 1: Mesopotamia and Sumer - . the great ziggurat of ur built during the early bronze age, 21st century bc. section

Daily Life in Ancient Sumer ( Making a Comic Strip ) - . students will be able to read, draw, and write about the daily

Ancient Mesopotamia The Sumer Civilization A study in cause and effect - . the fertile crescent the cradle of

Sumer - . mesopotamia - the land between two rivers. mesopotamia was a place where many cities began to grow. as its name

The Cultural Achievements of Sumer - . writing . the sumerians used cuneiform to make trade easier. they wrote not on

Why do historians classify ancient Sumer as a civilization? - . chapter

Mesopotamia and Sumer - . main idea: the first known civilization arose in mesopotamia, and its culture and innovations