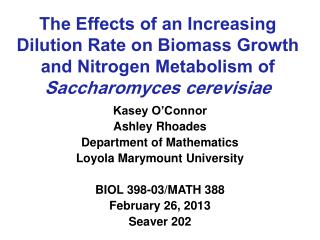 Working with Large Caseloads - . how to survive as a california counselor. working with large caseloads giving students

Kasey Sheldon - . kasey sheldon. it is an exciting transition opening the new education center with belstra milling and

Mathematics Education at the University of Nebraska Lincoln Jim Lewis - . in february 2003, the department of

What You Should Know About Adjusting to a New Culture - . the learning resource center loyola marymount university

Department of Mathematics and its Applications - . accreditation. our program is registered to grant phd in mathematics