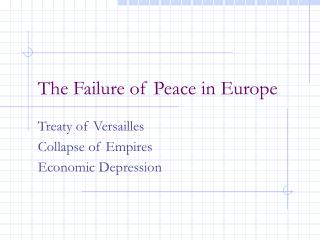 The Failure of Peace in Europe. Treaty of Versailles Collapse of Empires Economic Depression. The Treaty of Versailles. In January 1919 the “Big Three” meet to work on the peace plan. Wilson-United States David Lloyd George-Great Britain Georges Clemenceau-France Peace in Europe - Essential questions: what were wilson’s fourteen points? how did the treaty of versailles impact wwi?

Saving peace in Europe - . using mpc. carsten baum aarhus university. after the first half of the 20th century, we

MAPPIN(G) PEACE THE EUROPE OF YOUNGS

Peace and Stability in Europe - the role of the three institutions - . a contribution to the pse-meeting of socialists in

The Ukraine election: War and Peace in the East of Europe - . and consequences for the west. kiron reid. ulla &amp;

The power of sport in peace-making and peace-keeping - . south african sport and recreation conference 30th november -

The Failure of Absolutism in England - . elizabeth i. died in 1603 with no children, ending the tudor line of monarchs

The Gospel of Peace - . do you know this guy?. my marriage is bad. my finances are bad. work is bad. traffic is bad. the

JUSTICES OF THE PEACE - These were not paid for their service, they volunteered. chief local government officers,

The Terms of Peace - . ch 18 sec 4. wilson’s fourteen points. president wilson outlined a set of ideas to make for a

Justice Of The Peace - Justifiedlove.com is best website for :- officiant wedding, justice of the peace, wedding