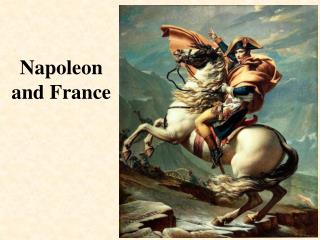 France between Robespierre and Napoleon - . 1793-1799. the fall of robespierre july,

THE RISE OF NAPOLEON AND IMPERIAL FRANCE - . the directory. 1795 – a new plan of government was drafted by the national

Napoleon - . in this lesson, students will be able to define the following terms: napoleon bonaparte invasion of

Napoleon - Warm-up: define “destiny” in your own words. do you believe that you have a destiny? if so, how will you