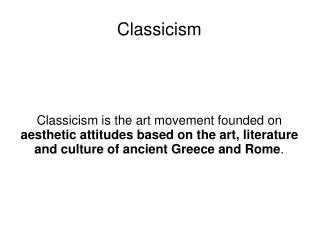 Classicism is the art movement founded on aesthetic attitudes based on the art, literature and culture of ancient Greece and Rome . Classicism. form proportion restrained emotion simplicity. The Classical Ideal. Neo-Classicism - . m s l e roy grade 11. neoclassicism: a reaction to the baroque. for every action, there is an

Renaissance and classicism - . the reinassance style begins in england in the middle of 16 th century. it consisted in a

CLASSICISM (1660-1798) - A “throwback” to classic culture and classic thought (greeks and romans). classicism

CLASSICISM ARCHITECTURE Week 15 - . classicism in architecture developed during the italian renaissance, notably in the

Introduction to Neo-Classicism - . why the name?. reverence for classical authors imitation of classical forms use of

Introduction to Neo-Classicism - . why the name?. reverence for classical authors imitation of classical forms use of

Neo-classicism 1720-1827 - . inspired by a revived interest in the styles of classical antiquity in painting, sculpture,