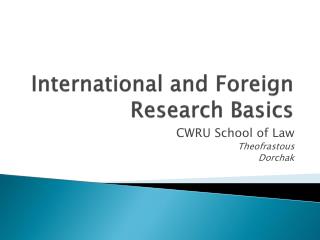 Basics of Foreign Trade and Exchange - . why nations trade. benefits of specialization law of comparative advantage

RESEARCH AND PUBLICATIONS: BASICS - . based on how to get a phd by estelle m. phillips and derek s. pugh, open university

Research Basics - . choosing a topic. pick something that interests you! y ou’ll enjoy learning more about it it will

Research Basics - . research basics. when doing research, you must give credit where credit is due! in a research

Research Basics - . pe 357. what is research?. can be diverse general definition is “finding answers to questions in an

International Trade and Foreign Exchange Markets - . i. the balance of payments – the sum of all the transactions that