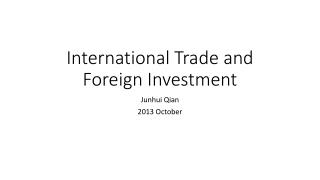 International Trade and Foreign Exchange Markets - . i. the balance of payments – the sum of all the transactions that