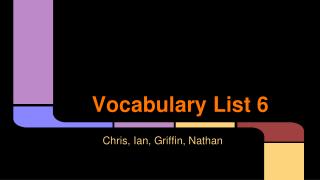 Vocabulary List 6. Chris, Ian, Griffin, Nathan. Impetuous (adj.). Definition: Of, pertaining to, or characterized by sudden or rash action; impulsive. Sentence from Haroun and the Sea of Stories : “It was Prince Bolo who burst into impetuous speech” (90). Vocabulary in museums and the provision of a webservice for museum vocabulary - . since the 1960s, museums are

Healthy and junk food - . the aims of the lesson:. to revise vocabulary and grammar material develop reading &amp; Vocabulary - On next page of texas chronicle, explain the following vocabulary terms. for each term you will need to

How Night Came to the Sea - . comprehension and vocabulary . vocabulary. the diamond ring gleamed on the queen’s hand.

Vocabulary list #6 - . adjourn- to put off or defer (put back) to another day. we’re done, meeting adjourned. syn. -