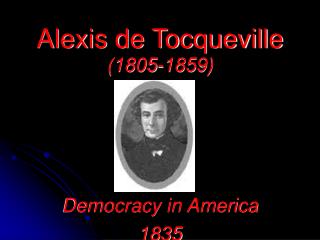 An Outsider Looking In : Alexis de Tocqueville - . “a worldwide revolution toward democracy is in full swing amongst

Aleijah,Alexis - . bastet ball. dr.jamas n aismit. he was born in 1890 and this death time is

TAH Collaborative Lesson - . how fair was alexis de tocqueville ’ s understanding of the separation of sexes in america

Equality and Equal Opportunity for Welfare - . richard arneson . central question and arneson’s project. what is the

Deculturalization and the Struggle for Equality - . a brief history of the education of dominated cultures in the united

Alexis de Toqueville Democracy in America (1835) - . “the majority lives in the perpetual practice of self-applause,