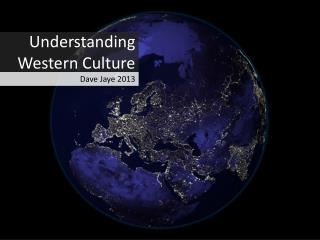 Dave Jaye 2013. Understanding Western Culture. Western culture ≠ Western Film / TV. (but does influence it). Originates from Ancient Greece (Europe). Western Individualism Roots. Greeks city states were isolated from each other and other cultures by mountains and the Sea. Indian Culture vs Western Culture - Cultures vary from one region to another and from one country to another. culture is

Western vs. Eastern Culture - Introduction. introduction: the seventeenth century brought about dramatic changes in the

UNDERSTANDING BIBLE CULTURE - . isa 53:6 all we like sheep have gone astray; we have turned, every one, to his own way;

Western Classical Thought and Culture - . 2 . the homeric moral outlook. 1. the ideal person and the ideal life. the