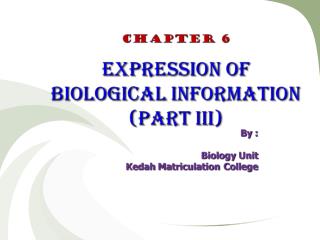 SC.912.L.16.3 - . describe the basic process of dna replication &amp; how it relates to the transmission &amp;

Chapter 17 - . from gene to protein. overview: the flow of genetic information. the information content of dna is in the

How was DNA determined to be the genetic (hereditary / information carrying) material of life? - Chapter 16 - molecular