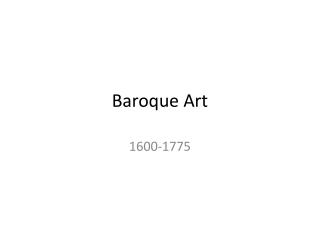 Baroque Art Assignment - . choose three works from those included in this presentation. for each answer the two questions

Baroque - . art. part i. introduction. what is &quot;baroque art”?. “baroque” as a term referring to a style of

Baroque - . baroque - from the portuguese or spanish “ barroco ” meaning “rough of imperfect pearl.” refers to

BAROQUE ART - . baroque art (history). baroque period started an era in the history of the western arts with the 17 th

Baroque Art - Abigail modlin project one . baroque art. this will be done in a computer lab. it is highly encouraged to

Baroque Era - . 1600-1750. baroque era. baroque is a term generally used by music historians to describe a broad range of

Baroque Art - . cynthia noble. key concepts the art that emerged in the late 16th- century europe, lasting into the 18th,

The Baroque Era - . painters. baroque painting and visual arts…. artists in the baroque era had a great desire to