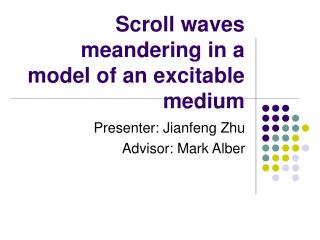 Scroll waves meandering in a model of an excitable medium

Scroll waves meandering in a model of an excitable medium. Presenter: Jianfeng Zhu Advisor: Mark Alber. Introduction. Scroll waves are three-dimensional(3D) vortices which are extensions of spiral waves (2D) that occurs in a variety of excitable media.

Scroll waves meandering in a model of an excitable medium

Excitable Tissues- Nerve - . prof. k. sivapalan. neuron. there are many types of cells. neuron is the main functional

Excitable tissue - . &quot;nerve and muscle&quot;. nerves and muscle are excitable structures, meaning that they

Mechanical Waves - . ch 21-23. waves. a wave is a disturbance in a medium which carries energy from one point to