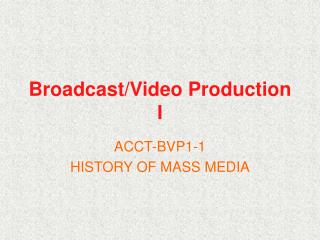 Broadcast/Video Production I. ACCT-BVP1-1 HISTORY OF MASS MEDIA. ACCT-BVP1-1. Students will identify inventions and technical and social developments that led to the creation of radio and television in a broadcast environment.