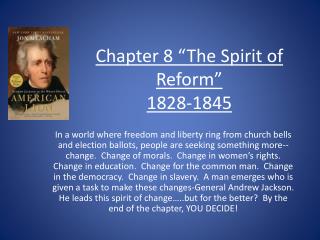 Chapter 21 - . the progressive spirit of reform 1868 - 1920. essential question. how did americans benefit from

An Era of Reform - . chapter 18. i. the spirit of reform. second great awakening revival of religious feeling 1820-1830s

41: Election of 1828 - This was andrew jackson vs. john quincy adams, round 2. adams won a disputed election over jackson

Confirmation - . grade 7 chapter 19. there are many titles for the holy spirit, including paraclete , counselor and

Chapter 18 - . preparation for reform. questions to be addressed in this chapter. what did meister eckhart teach and how

Iran Through the Looking Glass: History, Reform, and Revolution - . is iran a global threat? . russian and britain

Chapter 21 - . the progressive spirit of reform 1868 - 1920. essential question. how did americans benefit from