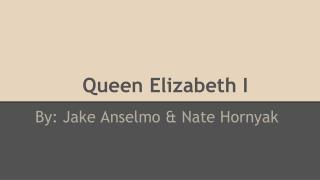 Queen Elizabeth I - . by: elizabeth barrick. childhood was elizabeth christened ?. born in greenwich palace. born on

Queen Elizabeth’s Problems - . 1558-1603. your task. you are an expert in foreign and domestic policy it is your job to

Elizabeth I and II: Two Lives, One Crown - . elizabeth i - “the queen with the heart of a king”. elizabeth i and ii -

Queen Elizabeth and King James I of England - . the elizabethan era. by: kiana taylor and krista frey pd.6. queen

Her Majesty Queen Elizabeth II - . was born on april 21 st in 1926; was married to prince philip, the duke of edinburgh,