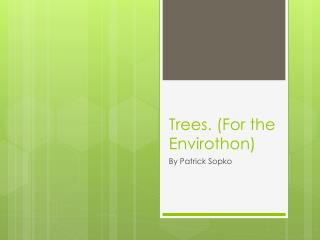 Trees. (For the Envirothon) Trees. (For the Envirothon)

How the Envirothon Works - . a basic introduction for our team. we will prepare this year. to compete at a one day state

Trees and beyond - . tutorial #3 cpsc 261. trees are just an example. the next two weeks in labs we are playing with

Trees - . how do trees help?. they help by giving us air to breath. we should plant more and more trees everyday. what

Consensus Trees - . consensus trees. in mp or ml analyses, more than one best cladogram may be obtained. consensus

THE TREES - . by philip larkin. the trees.  the trees are coming into leaf like something almost being said; the recent