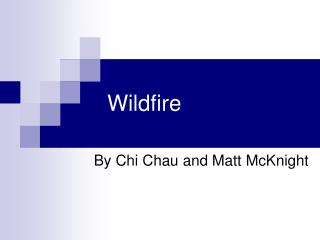 Wildfire - . cori webber &amp; hannah blomberg. definition of wildfire. a wildfire is “a sweeping and destructive

California Wildfire - Winds have driven the lake fire near big bear in the san bernardino national forest to 10,000

Wildfire Information Sheet - . your task today is to take the article that you were to read for today and make a concept