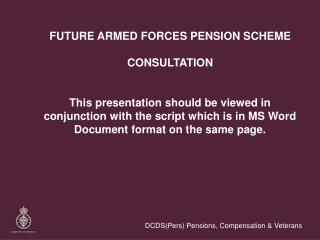 FUTURE ARMED FORCES PENSION SCHEME CONSULTATION This presentation should be viewed in conjunction with the script which is in MS Word Document format on the same page. Future Armed Forces Pension Scheme Team. PURPOSE. Armed Forces Community Covenant Grant Scheme - . what makes a good bid?. today we will cover…. some of the basics an

ARMED FORCES - . by branden kinney. nature of work. maintaining a strong national defense requires workers who can do

Pension Scheme Accounting - . by paul. a. miller and scott. r. mcneill. content. why bother? who sets the

Mobilizing the Armed Forces - . the japanese bombs and torpedoes that fell on pearl harbor had destroyed not only ships