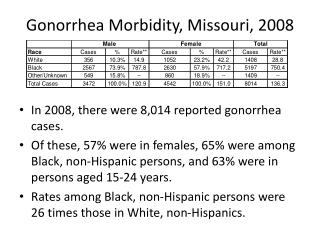 -- STDs and Teens -- AIDS/Gonorrhea - . outline. what is gonorrhea? how is it transmitted? how sever is it? what is aids?

Gonorrhea - By: ryan moran nick disessa ben laws. gonorrhea. means of transmission. any type of sex with an infected

Super Gonorrhea?! EW! - . gonorrhea is our newest superbug. this means that it has become resistant to drugs. in terms of

MISSOURI - . by isabelle vasquez. map of the state of missouri . missouri interesting